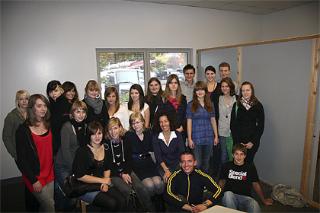 “We feel like we’re in a movie,” said Carina Wallmann, a Riesener student. “It’s like the movies we see and watch at home.”

Visiting students noticed differences in the importance of sports, class structure, homework, school events and the driving age of 16. They also saw how lessons are different each day.

“We have a lot of homework at home. Here it isn’t so much,” said Ann-Viathrin Hohaus, the only student who had ever been to the United States before.

What also amazed them was the idea that different grades can be in the same classes.

“In Germany it’s one grade in one class,” one visitor said. “We stay with the same people from class five to class 10.”

Another difference was the types of classes Mount Si students can take, compared to a strict schedule followed in Germany. Classes such as creative writing, technology, health and Web design were some of the classes students aren’t offered at Risesener.

“We have to choose math, German, a sport, one other language and one science,” said Davina Zirpel.

What were the students most excited about: Saturday’s homecoming dance.

Surprised at how involved and important sports and activities were to Mount Si students, Hohaus said they don’t have such events at home, just smaller versions of them.

The exchange happened after Riesener teacher Sven Lutzka sent an e-mail looking for a school where German was taught, and which would welcome a visit. Mount Si’s German teacher, Edina Kecse, responded.

“It worked out perfectly,” she said. “This is the first time for both of our schools to do this kind of program.”

The students and their accompanying teachers arrived Thursday, Oct. 8, and will leave Sunday, Oct. 25.

Matched up with American host families at Mount Si, they spent the weekends with families and came to school with their student partners. Exchange students also went on field trips to the Space Needle, the EMP, Microsoft and the Seattle Waterfront.

“We hope that this an intercultural experience for them,” Lutzka said, “and they really get to know the American way of life, everyday life, and how far their similarities and differences are in Germany and the states.”

Riesener teacher Barbara Conzen said that, as tourists, visitors rarely connect with families, so having this experience gave students a completely different point of view.

“You never get to know how they really live when you’re in a hotel,” she said. “This is a first-hand experience they’ll never get later.”

Involved with Mount Si’s Media/Video class with teacher Joe Dockery, the students were split up into groups and were asked to talk about their hometown, school and what they did with their free time.

“It’s a project the Mount Si students are taking on and are doing interviews with the German group and will edit for them as a DVD,” Kecse said. “It’s a two-week project and at the end it will be shown on Wildcat TV.”

Planning to make the program a yearly occurrence, Lutzka said students from the two schools will visit each other every year, taking turns in Germany and the United States.

Next year, Mount Si plans to do an exchange in Germany, while Reisener looks forward to coming back in 2011.